In 2020, the San Diego Zoo Wildlife Alliance (SDZWA) Plant Conservation Team provided funding to the ANPC to support plant conservation actions aligned with the recommendations of the Federal Threatened Species Scientific Committee (TSSC) for Post-fire Recovery to: 1) Prevent extinction and limit decline of native species and ecosystems affected by the 2019-20 fires, and 2) Reduce impacts from future fires.

The extensive fires in south-eastern Australia in 2019/2020 burnt a number of plant species (and their habitats) that were not considered threatened prior to the fires. This has the potential to increase the risk of those species becoming threatened in the near future should factors relating to the fires or other threats lead to decline. A range of factors will determine the ability of these species to successfully recover after the fires. This includes the separate and cumulative effects of fire severity, fire frequency, ongoing drought and a changing climate, along with directly biotic threats such as impacts of post-fire grazing by feral animals and stock, weeds, and pathogens. The IUCN Red List criteria for species identify different mechanisms by which species may be threatened with extinction and can be applied to species impacted by the 2019/2020 fires.

There are three main components to the project:

1. Support for development of a nomination for ‘Fire regimes that cause biodiversity decline’ as a Key Threatening Process (KTP) under the national Environment Protection and Biodiversity Conservation Act (EPBC Act).

Funding has supported (in combination with other funding sources) the assessment and preparation of this KTP document under the EPBC Act. The KTP nomination was completed in collaboration with experts from the TSSC, was endorsed by that expert Committee, and was released for public comment in December 2021. In April 2022, the Minister for the Environment, Sussan Ley, formally announced the KTP listing under the Act. Project funding also helped develop guidance on recovery actions to build the resilience of biota to future fires through lead authorship of a major technical report and contributed to three journal articles aimed at building the human contribution to the resilience of biota to future fires by quantifying the mechanisms of risk and investigating new approaches to reduce the incidence of future fires. 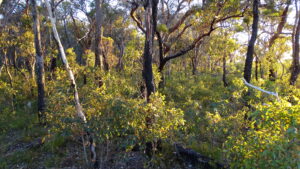 (b)
Understorey dynamics in Jarrah forest exemplify the drivers of fire risk measured in Zylstra et al. (2022). Recently burned Jarrah (a) has a dense understorey of germinated shrubs and saplings that burned seven times more frequently than the same forest left unburnt for around 50 years, which develops an open understorey (b). Processes of growth and forest succession such as self-thinning and self-pruning act as ‘ecological controls’ on wildfire spread and severity (Zylstra et al. (2022a). Photos: Philip Zylstra

Gallagher (2020), Gallagher et al. (2021, 2022) and Auld et al. (2020) identified species of national significance in Australia that were potentially adversely impacted by the 2019/2020 fires. Gallagher et al. (2018) and Le Breton et al. (2019) identified those species not currently recognised as threatened, that had geographic range sizes that are below the thresholds in IUCN Red List Criterion B. A combination of these sources allowed us to create a priority list of species for field inspections to identify factors threatening recovery after fire for species with restricted geographic range sizes. Two groups of taxa were chosen:

a) Species which allowed comparisons of those with canopy versus soil seed banks and between resprouting versus obligate seeding plants. Obligate seeding species (i.e. those killed by fire) with canopy seed banks are thought to be most at risk from high frequency fire or loss of recruitment following the 2019/2020 fires as the seed bank is exhausted in a single recruitment event after a fire. Obligate seeding species with soil seed banks are somewhat at risk as the seed bank declines, but some buffer may be present. Resprouting species are considered likely to be less at risk unless drought conditions have led to increased plant mortality before, during and after the 2019/2020 fires. The focus was on NSW endemics with a narrow-range, as NSW was the part of Australia most impacted by the 2019/2020 fires, and in order to collaborate with work proposed, or being undertaken, by the NSW Department of Planning and Environment (DPE) and universities on the recovery of other plant species after those fires. The ANPC is also working with UNSW to undertake IUCN Red List assessments and Conservation Assessments for some of these species. A completed IUCN Red List assessment and Conservation Advice has been completed for Banksia penicillata based on field work done by Baird and Benson (2021), in collaboration with UNSW. This recommends that the species be listed as Endangered under the EPBC Act and identifies a number of population declines from the 2019/2020 fires where those fires burnt over areas that had not recovered from a previous fire in 2013 (none of the seedlings from the 2013 fire had matured and produced woody fruits when they were killed by the 2019/2020 fires.) This assessment is now with the Commonwealth TSSC for consideration of listing as Endangered nationally. A Conservation Assessment report for Banksia paludosa subsp. astrolux has also been prepared and shows decline in some sites due to very low post-fire recruitment levels. 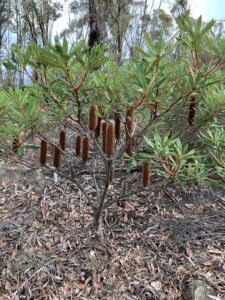 Banksia paludosa subsp astrolux is one of the target species being surveyed by the ANPC following the 2019/2020 bushfires. Photo: Tony Auld

b) Epiphytic orchids, which were a group of taxa that were difficult to effectively assess for the likely impacts of 2019/2020 fires as data was lacking. Eleven species of orchids have been chosen to examine risk of, in particular, fire severity on plant survival. These orchids occur on trees and depending on local fire severity may escape being burnt, be scorched and survive or may be killed. Field work on the epiphytic orchids, focusing on northern NSW, is currently being planned.

3. Impacts of Myrtle rust on plants of Myrtaceae

The ANPC is planning to undertake more post-fire surveys of the impacts of Myrtle rust on Myrtaceae species, to follow up on our Fire and Rust project from 2021 and complement our Safe Custody for Native Guava project currently underway and funded by the Commonwealth government. We are also supporting and participating in the development of a video on Myrtle Rust which is now in post-production.

Department of Agriculture, Water and the Environment (2022). Fire regimes that cause biodiversity decline as a key threatening process. Canberra, ACT.