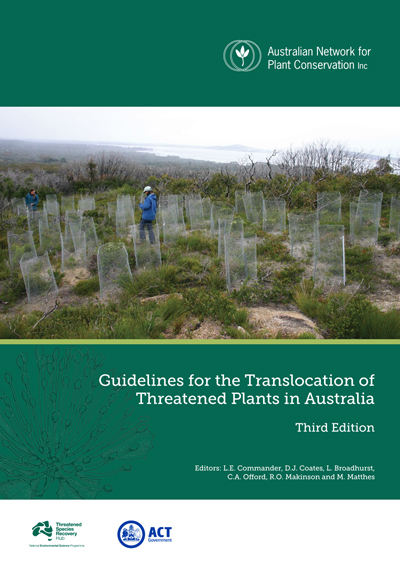 The Third Edition of the ANPC Guidelines for the Translocation of Threatened Plants in Australia was published in November 2018. You can purchase a hard copy of the Guidelines from our online shop or download the e-version here.

Click here to hear from the ANPC’s Dr Lucy Commander talk about the Translocation Guidelines [Video] “The translocation guidelines help fight plant extinction because they are providing up to date information on all facets of translocation to ensure successful outcomes”.

Plant translocation is one of the strategies used to prevent the extinction of threatened plants. The deliberate movement of plants, it is the plant equivalent of captive breeding and release programs for animals.

The Translocation Guidelines provides a step by step guide for plant translocation. This new edition provides up to date information and case studies to update the Second Edition, which was published in 2004. 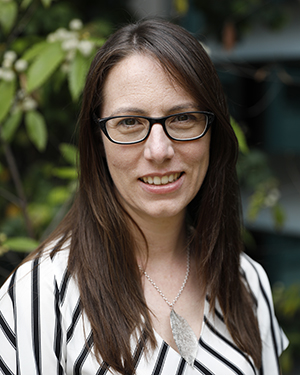 Over 30 experts (scientists and practitioners) contributed to the Translocation Guidelines, through consultation at two workshops, by revising the text of the guidelines and writing case studies. You can read the full versions of the case studies here.

The TSR Hub published an article on the Translocation Guidelines on 12 November 2018. Plant translocation: New guidelines a game changer. 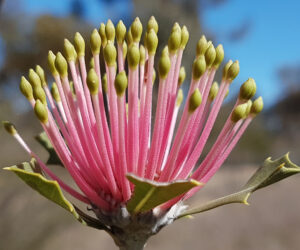 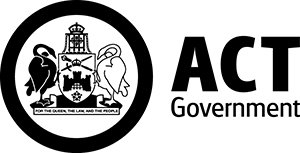 An ANPC Threatened Plant Translocation Workshop was held on Friday 3 May at the Environment Institute at The University of Adelaide, with 12 speakers presenting to a total of 57 participants. Material in the new Guidelines for the Translocation of Threatened Plants in Australia was covered as well as 7 local South Australian translocation case studies and a lively panel discussion. The range of speakers presented on topics such as translocation policies and requirements for approvals in South Australia, preparing a translocation proposal, collecting, testing and storing seed, and more. Thank you to our sponsors at the South Australian Murray-Darling Basin Natural Resources Management Board (through NRM levy funding), The University of Adelaide and the Threatened Species Recovery Hub.  Read more. 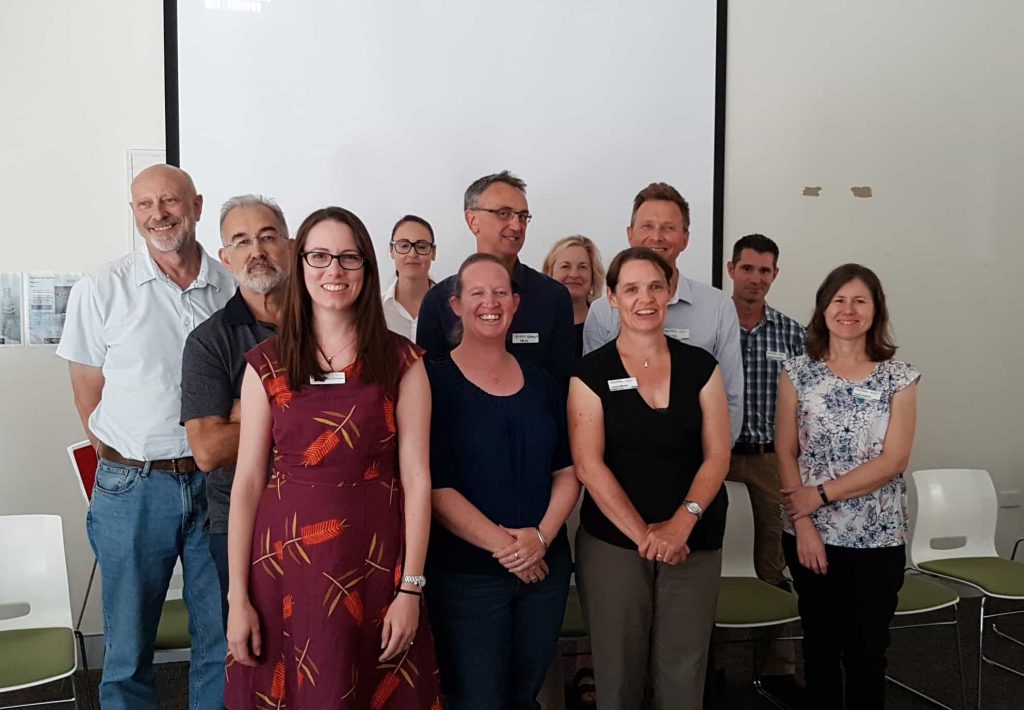 A hugely successful ANPC Threatened Plant Translocation Workshop was held on 14 March 2019 at the Department of Biodiversity, Conservation and Attractions (DBCA) in Kensington, Perth. Twelve speakers from DBCA and 51 participants joined ANPC Project Manager Lucy Commander in presenting various aspects of the translocation process. We finished the day with a lively panel discussion about issues in threatened plant conservation and translocation practice. Many people travelled from regional areas across the state to attend the workshop, and there was ample time for networking. Thanks to DBCA and the Threatened Species Recovery Hub for their support. Selected presentations will soon be available on the ANPC website! Read more. 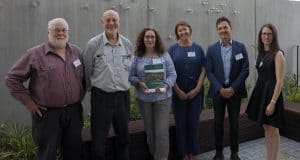 The Translocation Guidelines were launched by Sally Box, the Threatened Species Commissioner at the APCC12 welcome reception. A 1-day National Translocation Workshop was held during the conference.
View selected presentations from the workshop.
View the conference photos.

In April 2018, Dr David Coates organised a Threatened Species Recovery Hub workshop on Scoping the Benefits of Gene Pool Mixing for Threatened Plant Translocations. Over 20 geneticists, ecologists, and translocation experts met at the Royal Botanic Gardens Victoria to discuss the topic. Attendees identified that in some cases, gene pool mixing has the potential to rescue plant species from extinction, whereas in other cases, the consequences may be detrimental to the species. A paper is being prepared resulting from the discussion at the workshop. Useful feedback on two chapters of the Guidelines was also received at the workshop, and incorporated into the manuscript.

This workshop brought together 30 translocation experts from around Australia, to commence the process of updating the Guidelines. Firstly, Jen Silcock provided an update on her TSR Hub post-doc project to review plant translocations in Australia. The new structure of the guidelines was then discussed, including new content. After a group discussion on considering climate change when selecting source and recipient sites (a new topic for the Guidelines), break-out groups were formed to discuss each chapter. Case studies were also identified, which will be included in the Guidelines as well as published in Australasian Plant Conservation and online. Finally, a publicity strategy was discussed to ensure uptake and usage of the guidelines.
‘National review and workshop put spotlight on plant translocation‘. Published by the TSR Hub on 8 Aug 2017 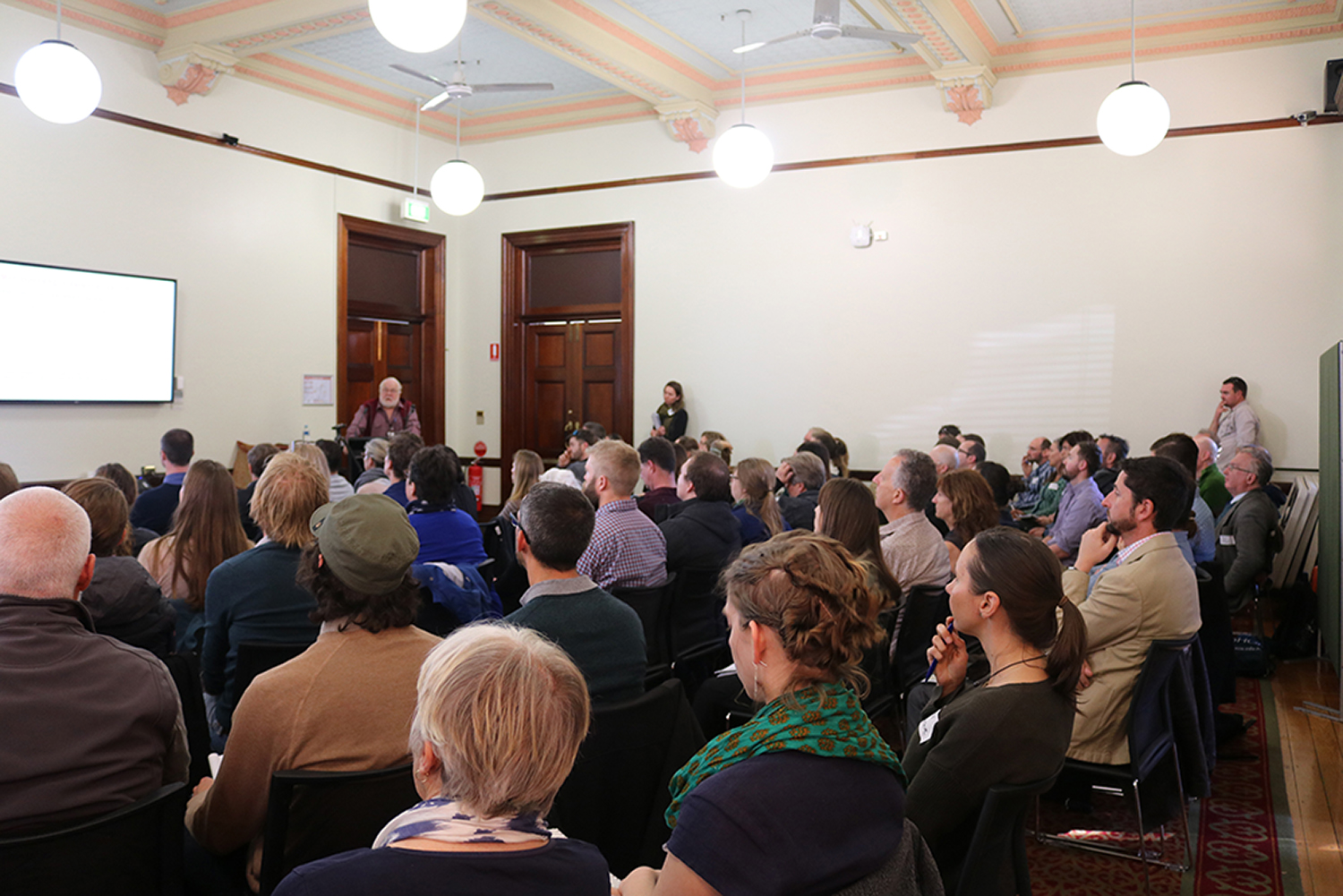 Organised by the ANPC and the Threatened Species Recovery Hub, with support from the NSW Office of Environment and Heritage and the Royal Botanic Garden Sydney, ‘Plants Going Places’ attracted a capacity audience of 80 people (with a waiting list) demonstrating a huge interest in plant translocation. Attendees included threatened species project coordinators, environmental consultants, local government officers, NGOs, NRM organisations, bushcare volunteers and community members who were involved, or had an interest, in policy and/or the implementation of planned translocations (including population augmentation and/or establishment of new populations). Local and national experts held a range of presentations on provenance, orchids, the science of translocation, monitoring, licensing, policy and numerous case studies including Asterolasia buxifolia, Fontainea oraria, Persoonia pauciflora, and Wollemia nobilis. Find out more and access the presentation slides and audio files.