RANGELANDS PADDOCK WALKS – PLANT ID AND MANAGEMENT IN THE RIVERINA

‘Drones, Paddock Walks and a Forum in Booligal and Hay’

It is not very often that nearly 100 people attend a paddock walk near the remote tiny hamlet of Booligal. But that is what happened at Ed and Rachael Crossley’s property “Torriganny” on the morning of May 10. In addition to local landholders and staff from the Hay office of Riverina Local Lands Services, numbers were bolstered by 70 final year students from Charles Sturt University in Wagga and Sydney University. The paddock walks were led by local ecologist, property owner and Project Manager with the Australian Network for Plant Conservation, Martin Driver. Other discussion topics on the day were a drone display provided by Ben Watts, a Molong landholder, stud merino breeder and TAFE drone demonstration teacher, and the use of the Hay Trees on Plains Landcare seeder by Bill Auldist.

The next day, the students and another group of landholders attended a Rangelands Forum held at the Shear Outback woolshed in Hay. Run by the Hay Merino Breeders Inc in conjunction with Riverina Local Land Services, the forum featured drone footage from the day before by Ben Watts and a talk by landholder Cameron Nield on how he uses drones and a water telemetry system on the family property “Benilkie”. Martin reinforced his message from the Booligal Wetlands Paddock Walk about the need to keep plant diversity in the paddock and the methods he has used to revegetate his home property “Barrabool”.

Media article published in The Riverine Grazier Wednesday 17 May 2017 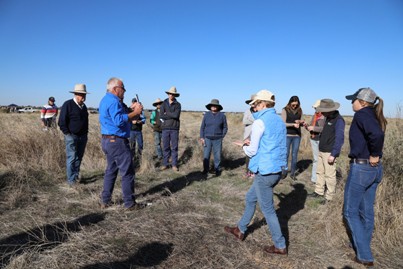 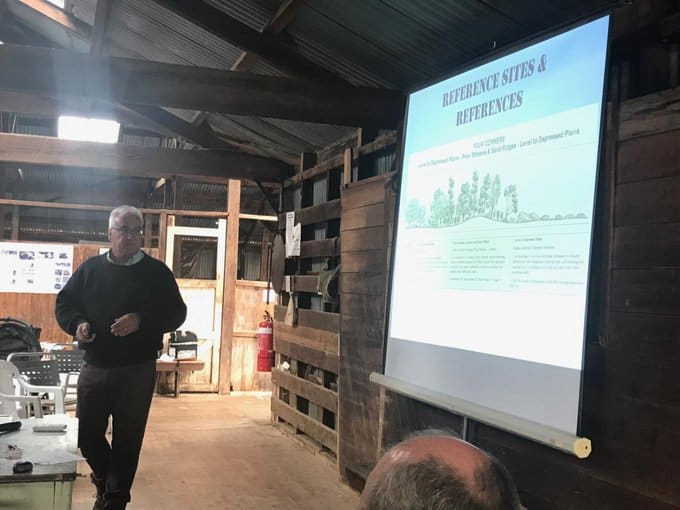 Following a commitment to return to the preserved Zara sandhill community in spring after an earlier June walk, a fourth successive Paddock Walk was organised by Riverina Local Land Services in conjunction with Landcare, Greening Australia and other agencies, focusing on the Riverine White Cypress Pine Sandhills. Sandhill Pine Woodland in the Riverina is listed as an Endangered Ecological Community under the NSW Threatened Species Conservation Act 1995. The woodlands are critical to the health of the region, supporting plants and animals and providing on-farm production benefits when integrated into farming systems.

As with previous Paddock Walks, which aim to increase plant identification skills and highlight the importance of revegetation, ANPC Project Manager and local Conargo property owner Martin Driver was the principal speaker. The day started with the twenty two participants meeting at the Royal Mail Hotel at Booroorban for refreshments and discussion of a native plant and resource display before the group moved south to the local property “Zara”. Situated near the Zara homestead is a fenced reserve that contains a long time preserved extensive sandhill vegetation community. The abundance of species in the reserve was breathtaking with many flowering and setting fruit with highlights including discovering a young White Cyprus Pine nursery and observing Quondong trees with large ripe fruit.

The second stage of the day involved driving to Ken and Jill Hooper’s Morago property “Moona” to observe a reclaimed sandhill on their property. The many steps required to successfully revegetate a sandhill were outlined by Ken to the group before he led a walk through the sandhill. Ken shared many of his ideas including the erecting of old, dead, hollow trees amongst the young plants to create instant fauna habitat. 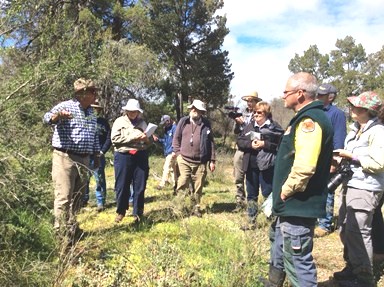 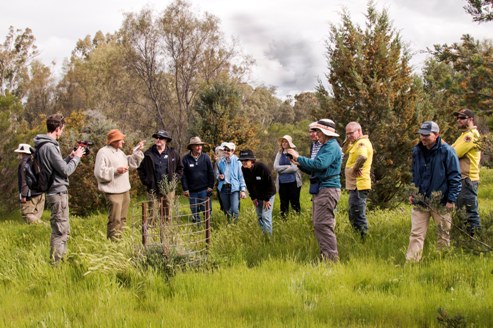 This sandhill paddock walk was held at Coleambally Site 11.

With the native vegetation bouncing back from recent rain events that followed a long dry summer and autumn, a third Paddock Walk was organised in early June by staff from Riverina Local Land Services Hay office in conjunction with Landcare, Greening Australia and other agencies, to visit Riverine White Cypress Pine Sandhill’s around Booroorban. These walks are part of a project to restore Pine Sandhills in the Rangelands funded by the NSW government through its Catchment Action program.

As with previous Walks, ANPC Project Manager and local Conargo property owner Martin Driver was the principal speaker. The twenty five participants met at the Royal Mail Hotel at Booroorban for a discussion and native plant and resource display, before moving on to local property “Zara,” owned by Australian Food and Agriculture Co Ltd. Situated near the Zara homestead is a fenced reserve that contains a long time preserved extensive sandhill vegetation community.

Following lunch at the Royal Mail Hotel, the group drove to another local property “Elmsleigh” recently purchased by the Hooke family. The first site visit was to a proposed sandhill reclamation area followed by a stop at a neighboring State Forest reserve, which contained many local species including shrubs such as Senna (Senna artemisiodes subsp. Coriacea and subsp. filifolia) and Yanga bush (Maireana brevifolia) and copperburrs (Maireana sp.) as well as young White Cyprus Pines and many Flax-Lilies or Dianella sp. growing in the leaf litter. The final stop was to a fenced native Quondong plantation on next door property “BurraBuroon” owned by the Butcher family where the prolific growth of Sweet Quondongs was observed and discussed. 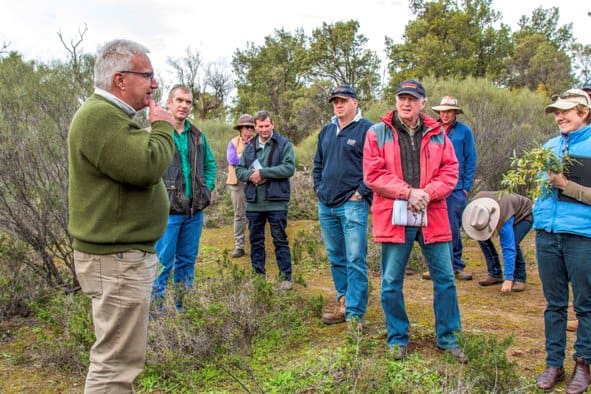 Following the success of a Paddock Walk held at Hay in early October last year after a productive wet winter, a second Walk was organised for the end of March at Booroorban, a location approximately 30 km south of Hay. This time the landscape showed the effects of a long hot and dry summer with a four month gap since the last effective rain.

As with the first Walk, ANPC Project Manager and local Conargo property owner Martin Driver was the principal speaker. The day started with the fifteen participants meeting at the Royal Mail Hotel at Booroorban. Here refreshments were provided and a native plant and a rangelands plant identification resource display discussed before the participants travelled out to local property Thalaka, which had been recently purchased by the Simpson family.

First viewing point at Thalaka was a predominant stand of Bladder Saltbush (Atriplex vesicaria), with discussion focused on a boundary fence line that showed a multi-decadal grazing pressure forced vegetation change from Bladder to Dillon Bush (Nitraria billardierei). Next stop was to view a sandhill vegetation community that included Yarran (Acacia melvillei), Silver and Hooked Needlewoods (Hakea leucoptera and Hakea tephrosperma), Butterbush (Pittosporum angustifolium), Emubush (Eremophila longifolia), Narrow Leaf Hopbush (Dodonaea viscosa subsp. angustissima), Ruby Saltbush (Enchylaena tomentosa), Punty Bush (Senna artemisiodes subsp coriacea), Thorny Saltbush (Rhagodia spinescens) and Western Boobialla (Myoporum montanum). From here we moved to a Rosewood community (Alectryon oleifolius) that was situated on the edge of a swamp containing Nitre Goosefoot (Chenopodium nitrariaceum) and Lignum (Muehlenbeckia florulenta) and an unexpected Flax-Lily or Dianella sp. protected by the lignum. On the northern side of the swamp, on a small rise, were some Quondong (Santalum acuminatum) trees that had one stage had been protected from grazing with netting guards to allow them to reach maturity and set fruit.

Returning to the homestead for a lunch break and discussion, the group also viewed a Miljee (Acacia oswaldii) tree and Cooba (Acacia salicina) trees or native willows around the garden yard.

Following the success of the two Paddock Walks, a third one has been requested and will take place with Martin Driver in the Booroorban area further focusing on management of the sandhill vegetation communities following a significant rainfall event, hopefully before June 30 this year. There was also significant interest from people in the collection of seed, propagation and re-establishment of a range of declining species like Quandong, Rosewood and Emubush. Interested people can contact Sally Ware by email or by mobile 0429307627, or Martin Driver by email or by mobile on 0400170957. 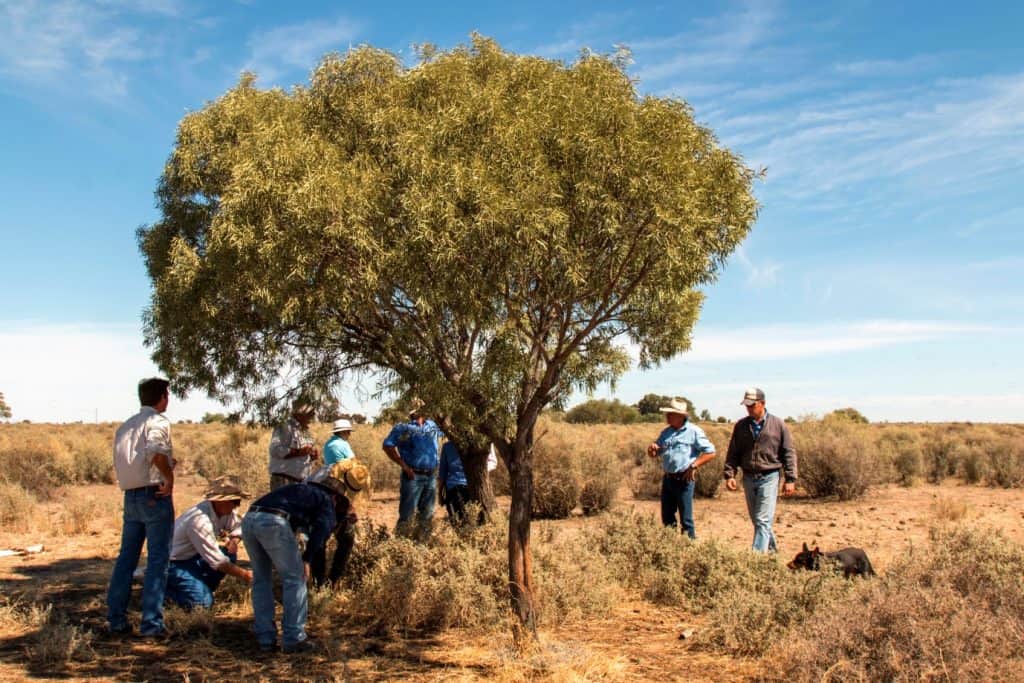 Inspecting a Quondong tree on the edge of a Nitre Goosefoot swamp during the Rangelands Paddock Walk at Booroorban. (Annabel Lugsdin)

A day in the paddock in early October after significant winter rain was always going to be informative. Relatively mild weather was an added bonus and many of the native plants were still in flower or were setting seed.

After a brief discussion at the Riverina Local Land Services (LLS) Hay office, which included a native plant display and an overview of Western NSW plant identification resources and reference material, and how to use them, the Rangelands Paddock Walk commenced in a stand of Bladder Saltbush (Atriplex vesicaria) south of McCormick’s Bore on the Hay Stock Route. After identification of the key plants in the area and a chat about their utilization, values and response to grazing, the car convoy moved down the Jerilderie Road to a 1950’s remnant Sandhill Pine Woodland exclosure site where only a few old White Cypress Pines (Callitris glaucophylla) remained, with little regeneration evident. This endangered ecological community was once dominant on the sandy rises in the area and is a target vegetation community for a suite of new conservation projects being put together in the western Riverina by project partners including LLS, ANPC, Greening Australia and Landcare.

Next stop was to view a small clump of 100 year old Prickly Bottlebrush (Callistemon brachyandrus) plants, one of only three sites known in the district. These and other shrubs were also once much more common along old stream beds across the plains and prompted ideas of initiating a new targeted conservation program for the region.

The Rangelands Paddock Walk was organised and funded by LLS staff and led by Martin Driver, ANPC Project Manager, ecologist and owner of local property “Barrabool” near Conargo NSW. “Barrabool” has been owned by the Driver family for over 100 years and is the site of many long-term biodiversity projects. The walk was attended by LLS staff, local Landcare staff, landholders and local community members. Another paddock walk with Martin is planned in November and interested people need to contact Sally Ware, Senior Land Services Officer (Rangelands/Grazing), by email or mobile 0429307627.

by Sally Ware and Martin Driver 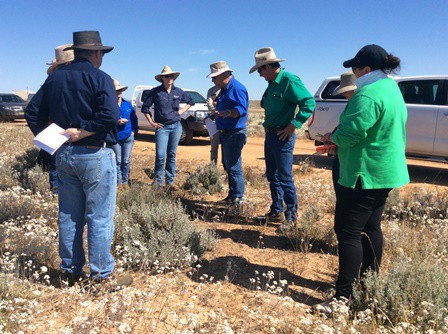 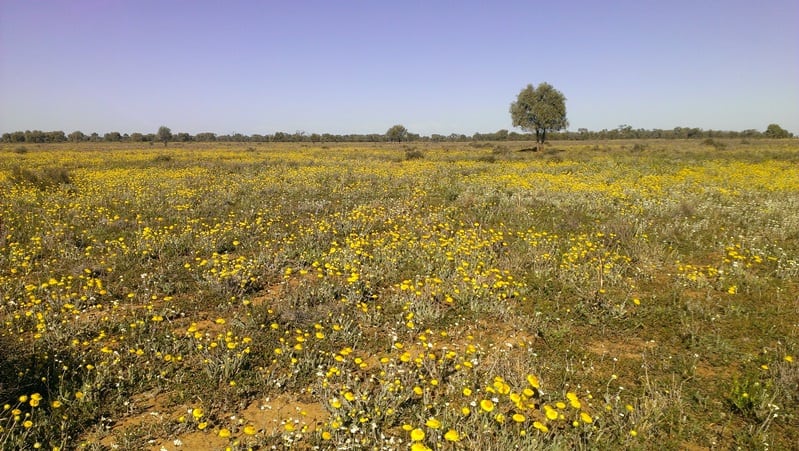