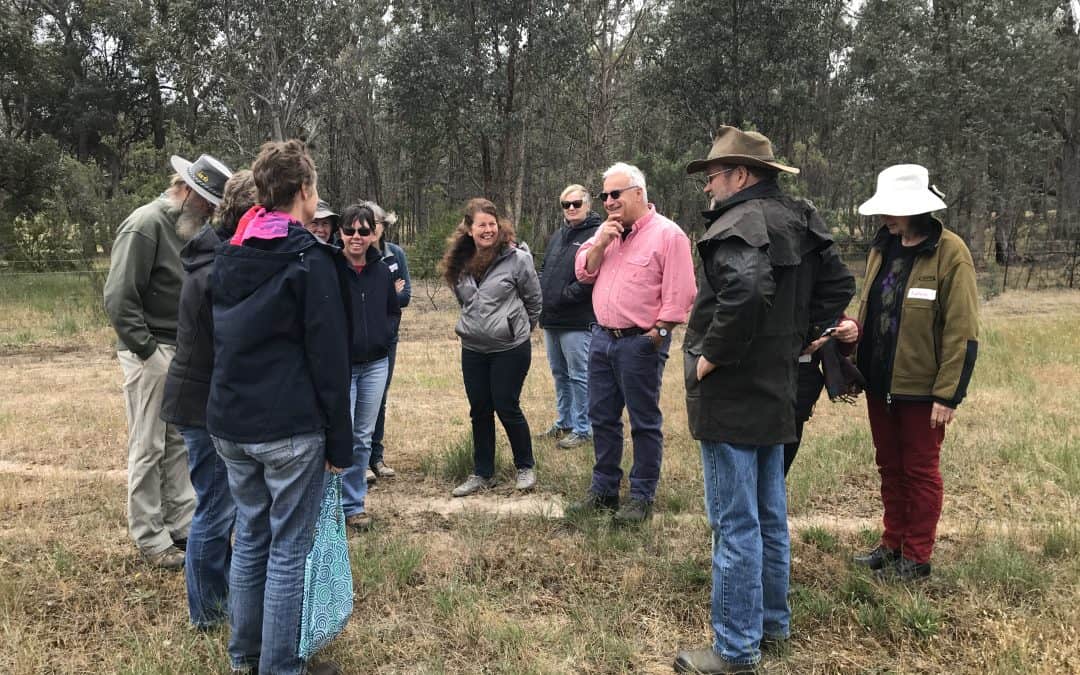 Wooragee Landcare Group in north-east regional Victoria held a Declining Species workshop on 10 November 2019. The group is currently involved in a Banksia marginata recovery project which has involved surveying, collecting seeds, cuttings and genetic material, as well as having plants grown for Seed Production Areas on both private and public land. ANPC’s Project Manager, Martin Driver spoke about a vital aspect of working with declining species – that is ensuring sources of seed are available for revegetation. Inadequate seed supplies are one of the blockers for revegetation being carried out on a sufficient scale to prevent species decline, and for focusing on particular declining species. A few of us in Wooragee Landcare reflected on the past seed banks and seed collection which seemed more active than at present.

The field trip was to a local farm where the owners Anne and Fleur Stelling have fenced off a paddock of remnant vegetation and removed all stock. For the first few years the paddock was lightly grazed but they have found they have had better recovery when all sheep grazing was removed. Not only have shrubs recovered and regenerated but a wonderful display of herbs and forbs – Blue Pincushion (Brunonia australis), Spur Velleia (Velleia sp), Pimelea sp, orchids, chocolate lilies and many more.

Landcare groups are in a valuable position to be able to act on species decline – they are not so bound by large strategies and have more flexibility than larger organisations.

It was a very thought-provoking session with Martin and has spurred us on to continue thinking (and acting) about seed and seed supply, so we can continue to implement on-ground works to prevent species decline.

(Photo: Sue Brunskill): ANPC’s Martin Driver leading the field trip to local farm where remnant vegetation has been fenced off from grazing.

Wooragee Landcare and the ANPC gratefully acknowledge the Norman Wettenhall Foundation for funding Martin’s attendance at the workshop as part of the Bring Back the Banksias project, and Dr Maurizio Rossetto from the Royal Botanic Gardens Sydney for genetic testing.