(this is an edited version of an article written by Christine Dartnell, Treasurer of the Barham Landcare Group Inc., and printed in the Koondrook & Barham Bridge newspaper on Thursday 5 May 2016)

On Thursday 28 April a plant identification workshop was held at the Barham Federation Botanic Reserve near the Murray River in south west NSW. Alan Mathers, President of Barham Landcare, welcomed everyone to the first workshop at the Reserve, gave a brief introduction to the invited guests which included Keith McDougall from cluBarham, Esther Kirby, Aboriginal Elder and Martin Driver from the ANPC and the presenter of the workshop, and then thanked all the Landcare group’s sponsors.

Keith McDougall then officially re-launched the Reserve and told of how his family lived close to the Reserve and how it was once used to grow Lucerne. The Welcome to Country was then carried out by Esther Kirby, Aboriginal Elder for the Barapa Barapa and Wemba Wemba tribes.

Martin Driver was then introduced to take us into the plant world.

Martin’s background includes working with native vegetation for over 35 years with CSIRO, Greening Australia, Murray Indigenous Seedbank, Murray CMA seedbank, PlainSense Vegetation Management and the Australian Network for Plant Conservation. He has lived in the Riverina and operated his grazing property at Barrabool over that time and done lots of restoration works and failed experiments.

Martin is also obsessed with management of native vegetation. He guided the group to reference material that is of benefit when identifying and recording native plants. Following a brief overview of native plants the group then set off along one of the walking trails.

Martin was able to identify and give a brief history of a lot of the plants along the way with an outstanding recollection. I am sure he must have dreams of native plants. His knowledge was immense and the group were well educated in the world of native plants and vegetation.

Many questions were asked and Martin was able to accommodate answers.

Morning tea and lunch were provided for the group and everyone who attended the workshop seemed to have learnt more about native plants and their uses as well as having a great day out in the Barham Federation Botanic Reserve. The weather was perfect, the catering more than adequate with Alan and Roger cooking the BBQ and the company superb.

Future plans include seed collecting and plant propagation workshops to assist us and other property owners with improving biodiversity and sustainable land management. Thank you to Murray Local Land Services for giving the Landcare Group the grant and support to conduct this workshop, 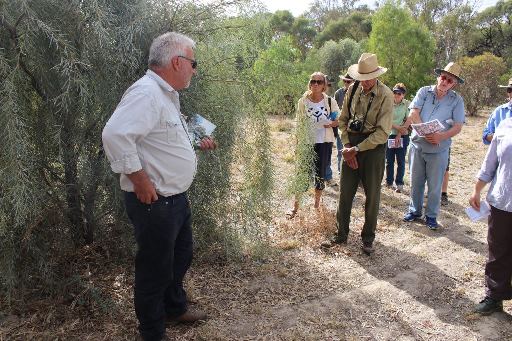 Presenter Martin Driver stands next to an Acacia pendula as he gives a very thorough talk along the walking trails at Barham Federation Botanic Reserve. (C. Dartnell) 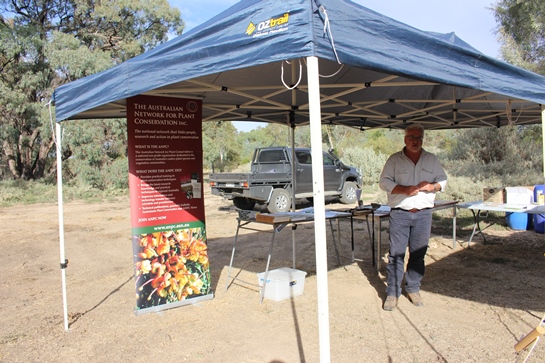