Having participated in a range of monthly workshops focused primarily on agriculture it was time for the participants to learn about the flora and landscapes that underpin grazing in Western NSW, and the traditional cultural uses of many of the arid zone species in the area. Led by Martin Driver from the ANPC and Mutawintji Park Rangers, the group were taken along a cultural tour of the sacred sites the park protects. Along their walk many plant species were identified and discussed for their productive grazing, cultural and environmental values, and the sheer beauty and adaptations of many of the plants. The need for management and various natural and induced restoration and regeneration strategies were also discussed.

For those who haven’t visited Mutawintji it is well worth the trip, especially after better rainfall conditions. The Park contains a significant geological and cultural desert landscape of rugged rocky ranges, rock pools and Red Gum lined creek beds that would have been a significant refuge for plants, animals and first nation peoples. Mutawinjti still plays that role today and needs to be further protected from goat predation to maintain regeneration of the precious flora that still persists.

The Youth Network had also invited Menindee Central School to join them for their workshop. Three students and three staff from the school were able to attend adding their own cultural knowledge to the experience. In total a group of 20 enjoyed the day’s workshop which included a history of Barkindji ceremony, an understanding of the creation and preservation of rock art hand stencils, traditional cooking techniques and local bush tucker as well as a wood carving workshop using harvested Mulga wood.

Due to the drought conditions, planned landholder workshops on native plant identification, use and management on Western NSW stations have been postponed to be held under better conditions. Opportunities have also been identified for both the Rangers and landholders for future workshops on identification, management and future potential commercial opportunities using some of the native plants or on plant and landscape tourism and education. 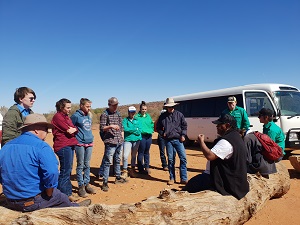 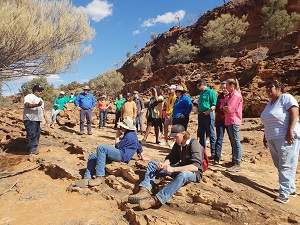