Landholders and interested community group members in the Broken Hill, White Cliffs and Bourke areas were invited to attend one of four 1 day plant identification workshops, to introduce participants to the plant communities and flora of the western NSW rangelands and provide them with the skills and information required to positively identify a range of common native plants found in the area.

Walk Around the Ridges

Some of the best seasonal conditions in the last forty years created great opportunities for a series of native plant identification and management workshops held this spring across the NSW Western Division in conjunction with Western Local Land Services (WLLS), Western Landcare and supported by the NSW Environmental Trust. Conducted by Australian Network for Plant Conservation (ANPC) Project Manager, Martin Driver, the workshops focussed on the resources available to identify native plants, systems for narrowing down the identification of plants and the use or management of those plants.

The first workshop on Sunday 28 August 2016 included a tour around Riddiford Arboretum, a wonderful Broken Hill local resource supported by Broken Hill Landcare. The walk identified the main tree and shrub species featured at the site including their key identifying features, propagation, management and their usefulness in low water use gardens around Broken Hill. The day included a light lunch and then a walk looking at identification and features of the plants of the Broken Hill regeneration area with Broken Hill Landcare group members. 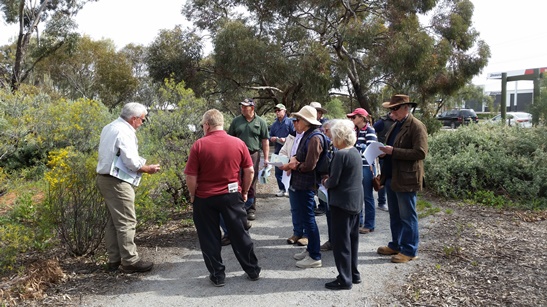 The second workshop on Monday 29 August was a grand tour of Clevedale and Rupee stations courtesy of owners Simon and Lindy Molesworth. The day’s identification task of many of the enormous range of ground plants present after excellent rains this season was greatly assisted by Lindy’s extensive scanned herbarium collection of plants collected on the properties since their ownership. The tour included inspection of the magnificent rocky hills of Sennas and Dodonaeas overlooking the magnificent regenerating Neilia (Acacia loderi) woodlands that are considered endangered in many locations. There were also inspections of beautifully vigorous Mulga (Acacia aneura) stands with colourful mixed understorey and open Bluebush (Mairena spp) plains with Showy Daisy Bush (Olearia spp). The group was also treated to lunch in a grove of Broken Hill Wattle (Eucalyptus gillii) and Rosewood (Alectryon spp) on a rocky outcrop adjacent to a drainage line. The ancient trees are rare, with little regeneration throughout their restricted local range, but showing signs of reshooting from basal lignotubers. There were discussions on effective grazing management using subdivision fencing and relocated waterpoints and the grazing impacts of kangaroos and feral goats. 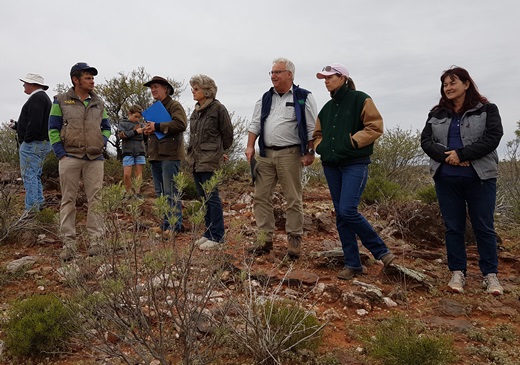 Rick Taylor of Glenhope station hosted the third workshop on Tuesday 30 August at his White Cliffs property. The local group of landholders were able to inspect open plains grassland herb fields and one of the most extensive stands of regenerating Leopardwood (Flindersia spp) across its range and a huge Canegrass wetland and rookery. There was also much discussion about the family’s demonstrations of water harvesting and ponding and restoration impacts of scalded lands by soil scarifying and litter and seed distribution. There were also ideas floated of establishing local seed harvesting pools and restoration trials of a range of locally native species. The group retreated back to the homestead for a late lunch to let the forecast rain settle in- which it did.

The final workshop at the Australian Bush Heritage property Naree, was cancelled due to rainfall but rescheduled on 1 December. The Western Landcare Forum and native grass and pasture identification and grazing management workshop was postponed until August 2017 (contact Louise Turner, 08 8091 6728). 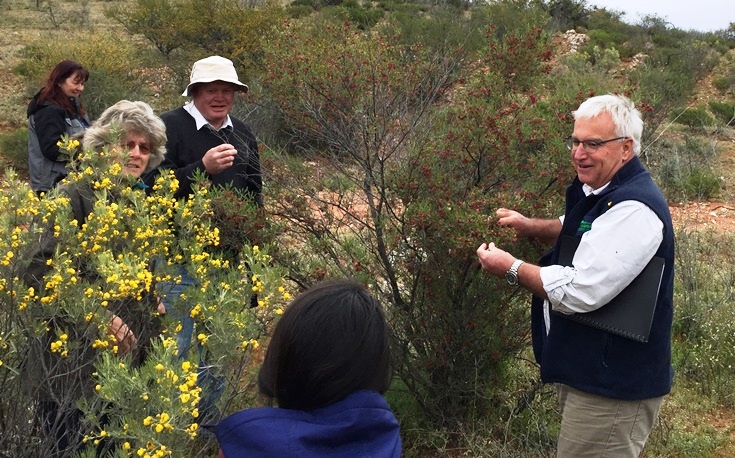 Thank you to all the landowners and participants and if you would like further information or are interested in participating in future on-property workshops contact Jasmine Wells, 0417 488 496, Martha Gouniai, 0449 956 819 or Martin Driver 0400 170957.